I am delighted to be featured in the Bury Times today! Huge thanks to Tom George for interviewing me about my new EP: 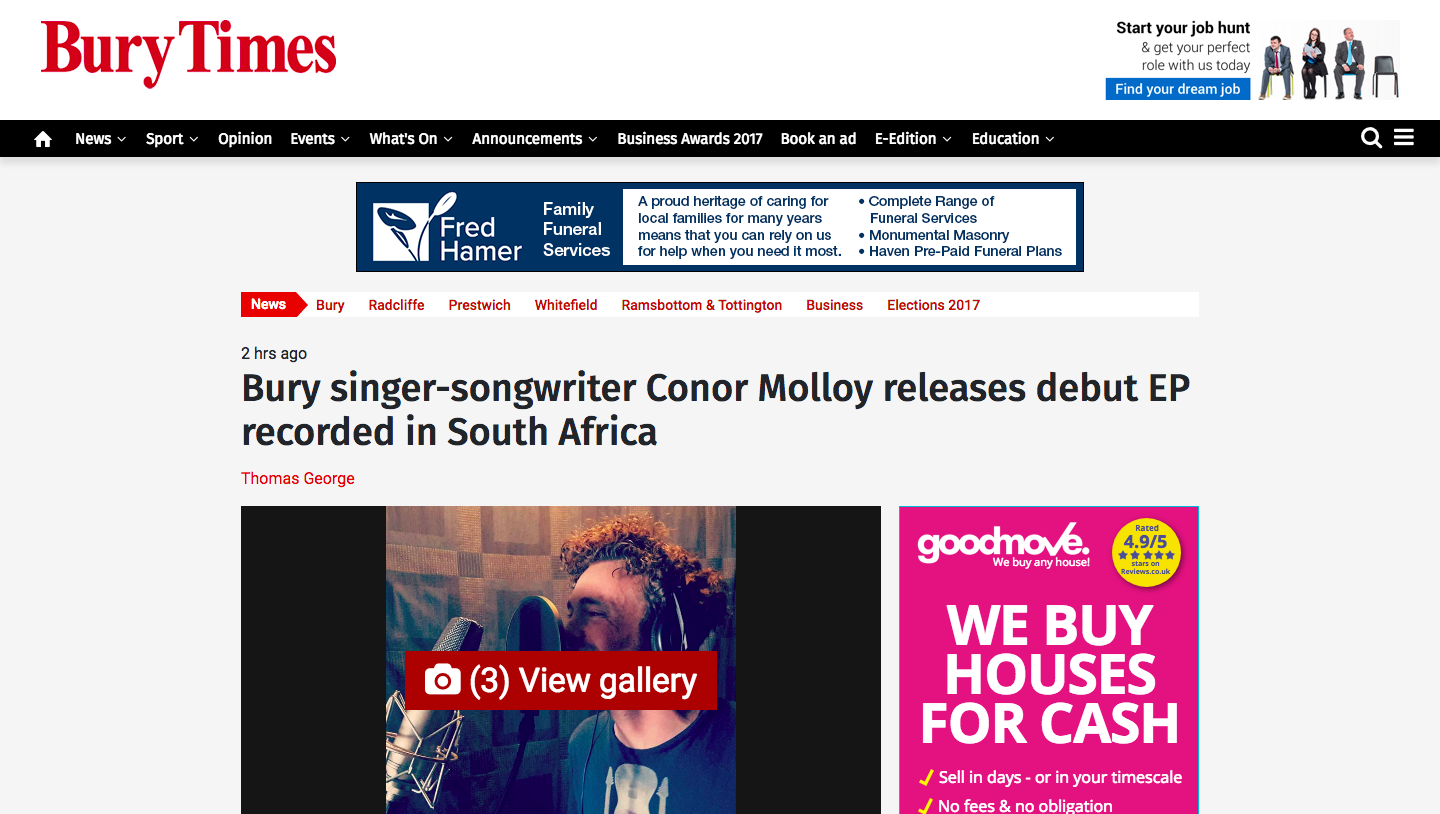 FROM Tottington to London, Paris, Oxford, South Africa, and back. That is the journey Bury singer-songwriter Conor Molloy has taken in the pursuit of musical success.
The former Bacup and Rawtenstall Grammar School student released his debut EP this week, titled South Africa Sessions, which was recorded during a visit to the country back in November.
He hopes the record can act as a springboard to bigger and better things, and help to fulfil ambitions he has harboured since writing his first song in the back of a car in Australia at the age of nine.

Molloy has been writing and recording ever since, refining his trademark style of folk-inspired melodies juxtaposed with humorous and, at times, sinister lyrics.
But music is not the only string to the 27-year-old’s bow. After sitting his A-levels at Holy Cross College in Bury, he spent a year travelling the world with a guitar in tow, playing songs ‘to anyone who would listen’, before completing a degree in French at King’s College London.
His passion for language then led to him studying a masters in French Literature at the University of Oxford, but instead of moving to the continent or pursuing a career in linguistics afterwards, Molloy opted to return home to focus on his music.
Back in Tottington, he juggled a part-time job at the Pack Horse pub, in Affetside, with writing, recording and performing at various venues across the North West, including Manchester’s Night and Day Café.
And while progress has been steady thus far, he hopes the release of the EP can open up his music to a wider audience.
he opportunity to record out in South Africa came about after he was approached on the music platform SoundCloud by Western Cape-based producer Jo Ellis, and Molloy says he is delighted with the results.
“Jo contacted me and said he could enhance the production of my songs and he liked what I did so I worked with him over the internet at first and then decided to go out there to work with him,” he explained.
“I’m very into learning how to mix and master the music myself, so I decided to go out, in part to record the EP, and in part to learn from Jo.
“I learnt a lot over there. It was a great experience and I think being in a different country affected the way things came together. It was a really smooth process and time really flew by.”
During his two-week sojourn in South Africa, Molloy recorded four songs, as well as mixing all six of the EP’s tracks.
The tracks are all new recordings of songs he has already been performing at shows for a while, including the tender ‘Carry You Home’, and the more playful duo ‘Teddy Bear’ and ‘Skittles at Midnight’.
The difference now, he believes, is they ‘sound like the finished article whereas I wasn’t sure they were quite there before’.
So what should listeners expect from the record?
“It’s quite punchy. It’s a little bit retro, but I think what Jo has tried to achieve is having a retro sound but also a modern one,” said Molloy.
“All the songs come from a storytelling point of view. They all have a chirpy melody and some darker lyrics.”
Molloy’s love of storytelling is reflected in his list of musical influences, which include Bob Dylan, Cat Stevens, and Leonard Cohen as well as the likes of Oasis, the Verve, The Libertines, and The Artic Monkeys.
The Beautiful South singer Paul Heaton is also cited as an inspiration due to ‘his clever lyrics and beautiful melodies’.
Molloy also points to a year spent living in Paris, as part of his French degree, as having had a significant effect on his songwriting.
“That was quite formative in my music writing because I got big into French poetry,” he said.
“Studying French has had a big influence on how I write my lyrics. Language is very important to me when I’m writing songs.”
Since returning from South Africa, Molloy has been helping his mum, Dominique, set up her own vegetarian shop, Simply Vegetarian, in Rawtenstall, something which has been a long-term dream of hers.
As part of the path he is plotting to realise his own, he says he has plans to release a full-length album at some point. However, for now he is keen to continue honing his production skills, and hopes to announce a number of festival dates for this summer.
You can listen to South Africa Sessions on most digital platforms, including Spotify, Soundcloud and Apple Music, or at www.conormolloymusic.com.
Share on Internet: